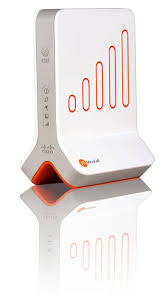 Here's the picture of the AT&T Microcell that Cisco (the manufacturer) has on their website. It's supposed to improve service inside the house.

I’ve been using AT&T cell service for nigh onto ten years. In the seven years we’ve been in the Ridgway area, our AT&T service works fine. Well, maybe not always fine. Sometimes we get four bars; sometimes we get none. The signal level seems completely uncorrelated with anything. It’s usually okay. So we dropped our Qwest landline—the landline (with all the taxes, surcharges, and taxes on surcharges) actually cost more than what my wife and I spend on our cell phones combined!

Of late, the zero-bar situation has gotten rather worse, so I looked into the AT&T 3G MicroCell, a device that connects to our Internet connection and will carry calls from home over the Internet rather than the rather variable cell tower, thus giving us four bars at home all the time. The AT&T MicroCell page says “Congratulations,” and that my zip code (physical address is 81403) qualifies for using one. Great! So we got one up at the Grand Junction AT&T store. But then the trouble began. Step 1 is to register the device. To do that, one goes to the web site and enters the serial number. It confirms the address and then… But we never found out what then, because the pre-populated address (which was correct) didn’t qualify for the service! So, I called for help and after a loooooong time with several different AT&T reps, was told that our address was indeed outside their coverage area. They said their system wouldn’t be able to pick up the GPS from the MicroCell.

Huh? I’m an electrical engineer (not to mention ham radio operator) and I know how GPSs work. (I also know how cell phones work.) For one, GPS units are receivers only, so AT&T can’t pick up “our” GPS. Second, the microcell works through the Internet, not over the air, so what’s the issue? Our cell phones pick up the local tower (most of the time) and the service is genuine AT&T. Every technical question I asked of the “network expert” elicited a response I knew wasn’t sound engineering.

So here’s my beef:

I don’t get it. If they could give me a reason that made sense I’d be okay. That’s the problem with being an engineer: I actually understand the technology involved and can spot a faulty answer a mile away. What really makes my blood simmer is that they won’t give me a straight answer except “no” for no good reason. I told them this makes me want to look at alternative carriers. I’ll have to check things out.

This entry was posted in Product Reviews. Bookmark the permalink.