I tested out my Wouxun KG-UV3D on APRS on Thursday, Sept 1st. The equipment went into my Blazer with a mag-mount antenna. As you can see from the following GPS track, the equipment performed well. This post describes my system, shows how well it works, and provides costs. 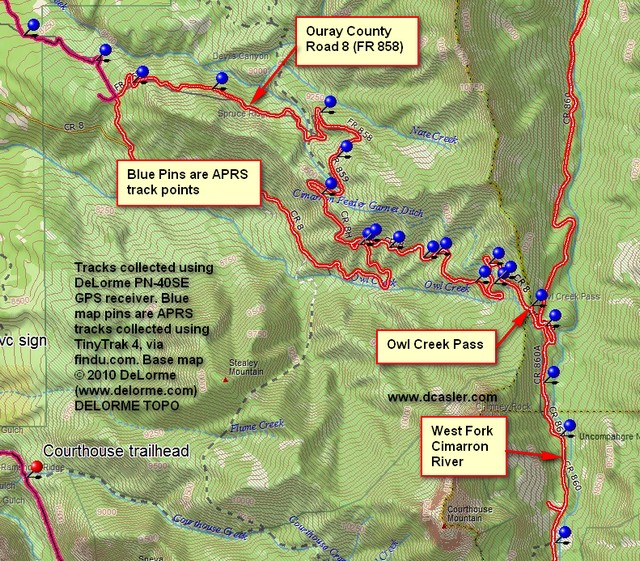 Wouxun KG-UV3D-created APRS track points. The APRS points are the blue pins, superimposed on a previously-created GPS track. Note I get solid results, even in the deep canyons and up over the pass.

I used the Wouxun KG-UV3D dual-band handheld on 144.39 MHz, the national APRS frequency, to see how well it would work. The APRS unit itself is a Byonics TinyTrak4. Normally I use this with an Icom handheld, but as it happens I have a set of Kenwood cables for the TinyTrak4, and the Wouxun KG-UV3D uses the Kenwood cables. So, without any adjustments, I just substituted the Kenwood cable and the Wouxun KG-UV3D. I used vehicle power for the TinyTrak 4, but let the Wouxun power itself using its own battery. As you can see from the tracks above, I got good results, even in canyons and up over the pass. The track points you see were collected on www.findu.com; I downloaded them and put them into DeLorme Topo North America. That means that my APRS packets were picked up by the various APRS nodes in the area and fed into the Internet. Not bad for such a remote area! The photo below shows my complete APRS setup using the Wouxun KG-UV3D, minus a PS/2 keyboard that can be plugged into the display unit to control the TinyTrak4 and also send and receive APRS messages. Each part is described below the photo. (See a previous post for what this setup looks like when used with my Icom IC-T7H.) 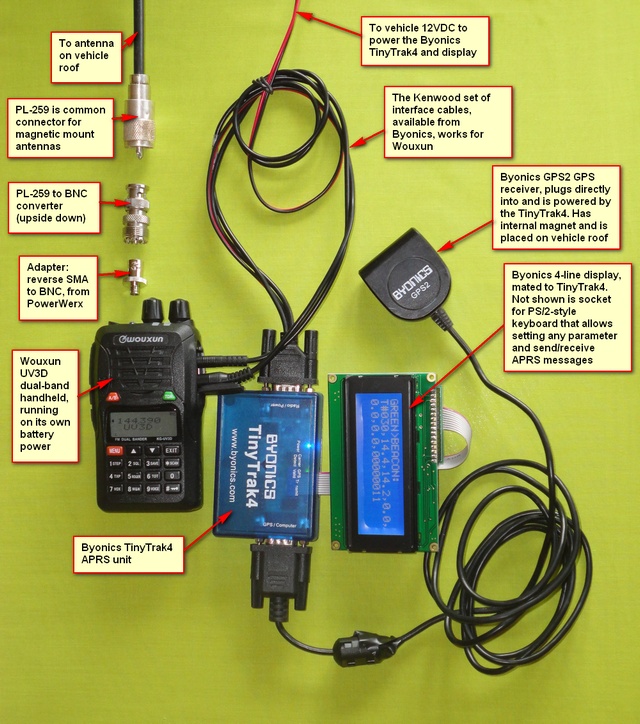 Wouxun KG-UV3D as part of my APRS station. See text for description of each part.

The various parts are these:

And there you have it! A complete APRS tracker plus the ability to receive APRS information from other stations, plus exchange APRS messages. Total cost of such a setup, purchased new, is radio, $120, programming cable, $16, plus special reverse SMA adapter, $6, plus standard male BNC to female SO-239, around $10, plus mag-mount antenna, $30, plus all the Byonics items, $214. (I’m assuming you have an old PS/2 keyboard laying around somewhere.) So the total investment is just shy of $400, plus whatever tax and shipping you might incur. Plan for $450. Note: in comparing these costs against APRS-capable mobile radios, consider the entire system cost, including antenna, any adapters, programming cables, power cables, and so on.