The most direct route from Ouray to Engineer Pass is to travel a few miles south of Ouray on US Hwy 550, then turn left onto County Road 18. I am pleased to report that this route is open and you can go all the way to Engineer Pass, or down into Animas Forks and thence to Silverton. I am also pleased to report that I traversed this road from east to west on Tuesday evening and did not die in the attempt (nor did I fall down, or for that matter, even come close to falling down). However, I do not like this road. At all. The reason is because it is so nasty that after a mile or so the fun goes away and after that it’s just plain work. If you do travel this road, I suggest you take it as I did—from the east and down to the west. The road is full of scree and loose dirt, lots of exposed rocks, and some water crossing near the top. And check out this photo: 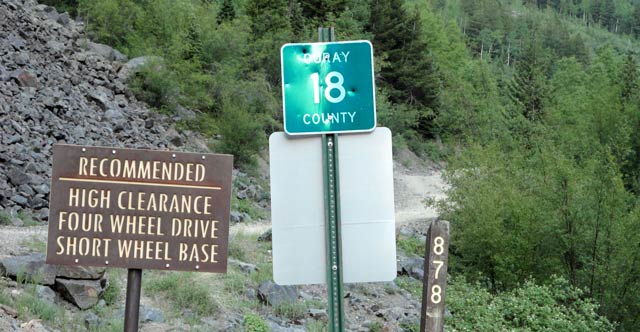 Let me repeat the sign’s warning: “Recommended: High clearance four wheel drive short wheel base.” The county is too generous. It should say “mandatory,” not “recommended.” Do not attempt this road in your Explorer, Blazer, or Subaru. And it’s really too narrow for a 4WD pickup truck. You can also travel this road on an ATV (there is a small parking area at the entrance to the road, plus another small parking area across US Hwy 550), though you should be experienced and be careful about tipping your vehicle. I have been both up and down this road quite a few times on my Yamaha XT-250. It’s much easier for a motorcycle because I only need a path about six inches wide, which is nearly always relatively easy to find, though sometimes it involves traveling up or down some big rocks. Coming down my path included rocks that dropped about a foot—something I can handle going down but not up. Let’s look at the GPS map: 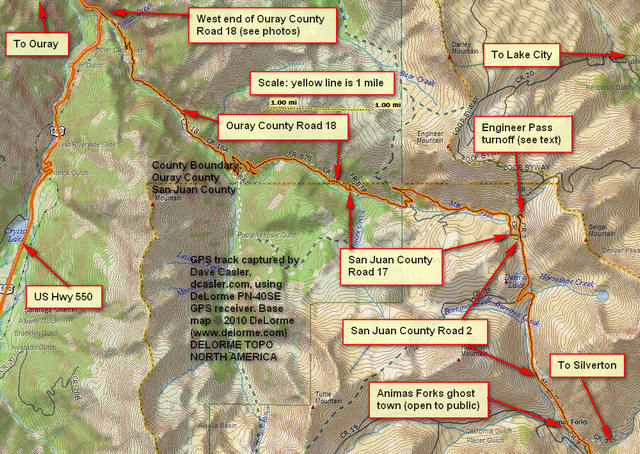 At last I have a good GPS track for this road! The handlebar mount for the GPS works very well and gives me much more consistent tracks than carrying the GPS in a pocket, plus I can refer to it while riding. Now, about the road. It is Ouray County Road 18 (and Forest Road 878) while in Ouray County. The county boundary is the horizontal dotted line where the road becomes San Juan County Road 17. It bears this moniker up to the intersection with San Juan County Road 2. CR 2 travels north to Engineer Pass (see spur track) and south to Animas Forks and thence to Silverton. (I might point out that not far west of the intersection is Denver Divide, which is a gentle pass along San Juan CR 17. It can be quite pretty near sunset, but if you’re up there near sunset, you run the risk of trying to get down to Ouray in the dark!)

My travels Tuesday evening took me up over Corkscrew, through Silverton, and up CR 2 to Animas Forks. I thought I’d pop up to Engineer Pass, but it was nearly 7:00 p.m. and the road up to the pass was longer than I remembered it, so I turned around and went toward Ouray.

Here are some statistics. San Juan CR 2 from Animas Forks to the intersection with CR 17 is 2.5 miles (from the GPS track). I did this in ten minutes, or an average of 15 miles per hour (some first gear, some second). But from the intersection down to Hwy 550 is 8.1 miles, which I did in 49 minutes, for an average of a blistering 10 mph (nearly all first gear). Mind you, that included stopping where several Jeeps had gathered to deal with a Jeep that had one wheel over the side (while they had a pretty intractable problem with the Jeep, there were enough vehicles there that no one would suffer from exposure during the night). But…motorcycles are by far the fastest means of transport over this road. You will at least double that time on an ATV, and the last time I traveled down this road in a Jeep about the best we could achieve was 3 mph!

Now…what’s to see? Well, the views from Animas Forks down to Hwy 550 aren’t nearly as spectacular as those along Ouray County Road 20A up Corkscrew Gulch to Corkscrew Pass. However, if you continue on up to Engineer Pass, you can turn off at Oh! Point and see some pretty spectacular things, plus the view from Engineer Pass isn’t shabby.

By the way, as I recall, the road from Engineer Pass down into Lake City is relatively mild. Oh…I didn’t take the detour from Animas Forks up to Cinnamon Pass, but I’ve heard it’s open.

So, there you are. Now, mind you, there are rougher roads to try, but those who rent Jeeps in Ouray won’t let you travel on them. In fact, that day when I rented the Jeep so Loretta could see this all firsthand, they told me to go up Corkscrew and come down Engineer (CR 18), and not to attempt to go up CR 18. It proved to be good advice.