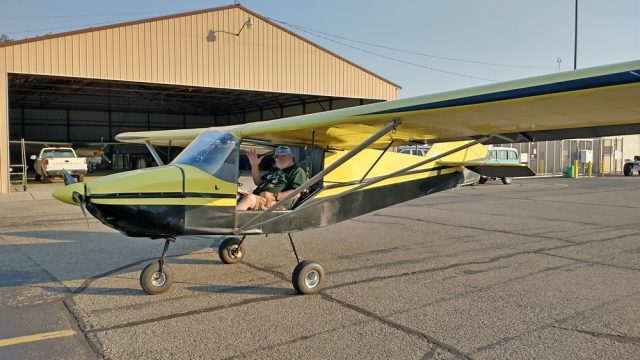 I purchased the aircraft in July, 2020, at about 213 Hobbs hours. The aircraft was based at Buckeye, AZ (BXK). I took beginning flight training at Buckeye for two weeks and then my instructor and I ferried the plane to Delta, CO, (AJZ) where it is currently based.

Why am I selling?

I got the airplane because there was no other sport aircraft around I could train in. But over 105 flight training hours later, it looks like I will never solo. I’m told I forget important things and sometimes don’t notice important things happening. That’s not something you can train your way out of. So I’ve drawn a line under my training and have put the aircraft up for sale. It breaks my heart to do so and frankly leaves me depressed, but I need to face reality and move on. I’ve got a nice YouTube channel about ham radio (www.youtube.com/davecasler) that has about 97,000 subscribers, so I have plenty to do. But I must admit I’m looking at videos about ultralight aircraft. Maybe an Aerolite 103?

The aircraft kit was manufactured by RANS of Hays, Kansas. It was built by Patten Harvey, owner, and certified by him on October 16, 2007. He received some dealer help from the Glendale, AZ, dealer in its construction. The aircraft was certified that same day by Gary Towner, and given a Special Airworthiness Certificate and Operating Limitations.

Note that because this is an experimental – amateur-built aircraft, the manufacturer on the paperwork is listed as Harvey Patten and the model is a RANS S-6ES. RANS, of Hays, KS, built the kit, model S-6ES. About 1000 S-6 kits were built and sold.

On January 28, 2011, with about 197 hours on the aircraft, a pilot who was thoroughly familiar with the aircraft took off from Sedona, AZ, and headed to Buckeye, AZ. He lost elevator control almost immediately due to a mechanical issue: three bolts on the bell crank for pitch control came loose and fell out due to a lack of the cotter keys. Using acceleration and deceleration to control pitch up and pitch down, he flew the aircraft to Buckeye. It hit the ground hard, breaking the front wheel fork and flattening the main gear mechanism. The pilot walked away sore but safe.

You can see the National Transportation Safety Board (NTSB) Docket (collection of documents) on the incident at https://data.ntsb.gov/Docket/?NTSBNumber=WPR11CA112.

The aircraft sat for several years before restoration was attempted. The maintenance logbook has no entry for the accident. The aircraft log shows change of ownership from Patten Harvey to two partners, Snyder/Flood, in April 2017. The log shows a signature for return to service on December 15, 2017. The newer logbook shows additional servicing done on January 12, 2018, with Hobbs time of 199.1 hours. I purchased the aircraft on July 21, 2020. Hobbs time was about 216.

For my demo flight from Glendale, AZ, airport, to show me his confidence in the rebuilt aircraft, the demo pilot was the same pilot who had lived through the loss of control incident.