Red rock country, right? Temps in the low 100°F’s, right? Four wheeling and hit those trails, right?
Well, maybe not in winter. Loretta and I took our Christmas retreat this year in Moab—and got right properly snowed on. Add snow and fog to the red rocks and out come some wonderful views not available to all those who throng Moab “in season.” Here are 11 examples, all taken with my iPhone 5S.

We toured Arches National Park on Christmas Day. The Park was wide open, but there were no attendants at the gate. That meant free entrance. It also meant no map. We thought we’d have the place to ourselves, but not so. Lots of California plates, and lots of Asian tourists. Everyone was very friendly. Arches National Park: Balancing rock. Note the blue arrow and circle in the lower left hand corner. That’s a tourist to give some perspective. There are other tourists closer to the formation that are barely visible, so, yes, it’s really big. You will never catch me throwing a sleeping bag under this one and pretending to be able to sleep! Arches National Park. An arch. Without a map, I can’t name it. Do you know the name? This is what it looks like from pretty close to the road.

I point out that the snow did not cover only the formations, but also the road. We had our 4WD Blazer and were glad we brought it instead of the Prius. The end of the road brought us to Devil’s Garden. I don’t see how anyone does gardening in this weather. (The pic is modified slightly to remove the restrooms and a couple pesky cars. This is a photo I put on Facebook.) 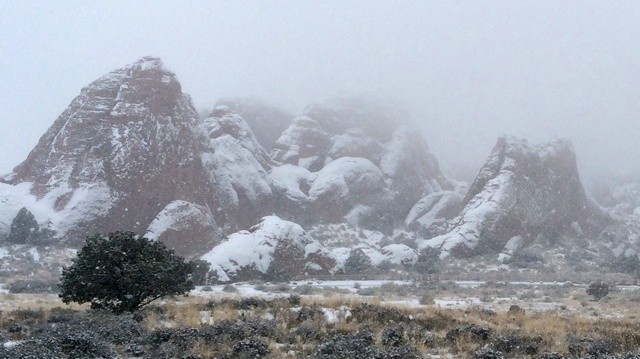 We went other places, too. We took Potash Road to the west of Moab. Moab, Potash Road: Jug Handle Arch. You can see why it has the name. Moab, Potash Road: Some large rock formations across the river. I like the way the snowy edges line up parallel to each other. Okay, I’m an engineer, so like all other geeks, I like trains. There’s a track running to the potash mine that runs, appropriately enough, along Potash Road. Moab, Potash Road: railroad tracks leading to the potash mine.

As a reminder that we are not the first people to discover the area, there are “Indian writings” (that’s what the highway sign said). Lastly, here are a couple shots taken along Utah Highway 128, which runs along the Colorado River from Moab to the northeast. And, finally, here’s the sun rising over Fisher Towers. Okay, so it was a bit later in the morning, but I still caught the sun just peeping over the towers. This one is cropped slightly differently from the one I put on Facebook. 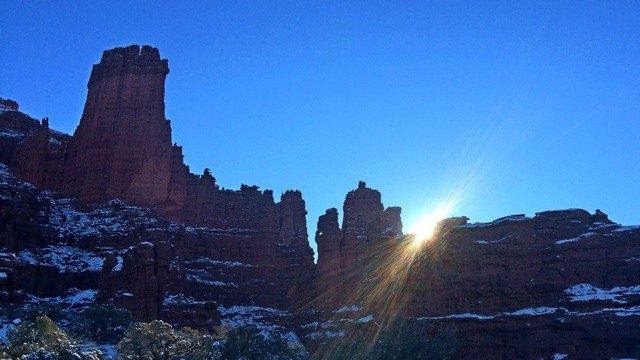 It was a wonderful trip and we had a great time. Now, we need to return when it’s warmer and the trails are dry!

This entry was posted in Personal, Utah and tagged Arches National Park, Moab. Bookmark the permalink.

4 Responses to Moab and Arches National Park in Winter