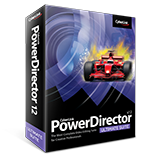 I create my videos in CyberLink PowerDirector 12

Bottom line: As far as I can tell, CyberLink PowerDirector 12 is by far and away the best of the consumer video editing suites. By consumer I mean you won’t use this to edit a feature-length film, but it’s still pretty sophisticated. At the same time, a novice will find it intuitive and easy to use.

My website is full of videos, mostly related to ham radio or motorcycling. I’ve tried different methods for making them, and after considerable frustration with Roxio VideoWave’s lack of stability, I converted to CyberLink PowerDirector (PDR). As it turned out, my HP PC already had a free starter version of CyberLink PowerDirector, which I tried and found to be far more stable than the Roxio software I’d paid for. So I ordered PDR version 9 from CyberLink, which I found to be easy to use and—important to me—far more stable than the Roxio software (keep in mind this is a couple years ago—Roxio may have improved). I enjoyed the clean PDR interface for trimming and joining video segments, adding royalty-free music from SmartSound, and creating titles. And it even autosaves the project periodically, something Roxio didn’t do back then.

Since then I upgraded to PDR 10, then PDR 11, and now PDR 12. For the PDR 12 update, I opted for the “suite,” meaning that ColorDirector and AudioDirector are included. The first version of PDR 12 that I downloaded, Build 2027, was disappointingly slow. But CyberLink has issued two free updates since then: Build 2230 and Build 2420. These fixed the slowness issue. Overall, with the correct settings, I’d say that the PDR 12 video output, after uploading to YouTube, is the best I’ve seen of all the PDR versions. You can’t tell the difference between playing a rendered video locally or playing the YouTube version. (Another update, already available as a beta, will soon be available. I tried the beta version and had a couple issues, so I backed off to Build 2420.)

A word about the various PowerDirector Version 12 editions. Each builds on the previous. Let me translate their marketing language for you. Prices are web download editions as of today.

You can read CyberLink’s comparision by clicking here. You can see what the full feature set is by reading their website. I haven’t used all the features, so this is a review of those I have.

A couple words: video editing requires a relatively powerful desktop or laptop. My desktop is several years old, and even though it sports an NVIDIA graphics card, which PDR uses to accelerate processing, my new Toshiba laptop beats it hands down. I now do all my editing and rendering on the laptop. CyberLink natively supports 64-bit processing. A word to the wise: the CyberLink code is huge. When I downloaded the Ultimate version of PDR 12, the files added up to six gigabytes. If that’s too big a download for you, you can order a disc (they call it a CD, but it’s a couple of DVDs) for an extra $15 plus shipping.

Oh, and beware that your video collection will grow quickly, and video files are large. I’ve found that a day’s motorcycle ride worth of GoPro Hero 2 video can be as much as 16 GB. You can very quickly fill up a 1 TB hard drive. A suggestion is to use an external drive to hold your video clips. Also, PDR 12 allows you to “pack” the project into a single directory that contains all the files actually used to create the video, so you can go back and edit the project again. I like to copy these packed directories to data DVDs (sometimes having to use the bigger and more expensive 8 GB double-layer DVDs to contain all the clips and the rendered video). I also store a copy of the packed project onto a network hard drive, and then I clean my laptop of all the video and project files to manage my disk space back. BEWARE that when PD packs your project, it does NOT include the rendered output file, so you’ll need to copy this separately.

So what’s not to like? Well, nothing is perfect. And, with as many hours I’m in the editing seat, minor frustrations can become major annoyances. But I don’t see anything better out there that solves these problems. Hopefully future editions will address these gripes:

PDR 12 has many features I haven’t used, such as the multi-cam feature, 3D, and 4K. In fact, it has so many features I’ll probably never use them all.

How many stars do I give PDR 12? Well, it does frustrate me sometimes, so not five, but maybe four and a half. Okay, given the superb rendering that’s quite an improvement over PDR 11, maybe four and three quarters.

To be fair, I’ll point out that CyberLink recently added me to their “Most Valued Professional” (MVP) program (see here). They approached me based on all the videos I put on YouTube. I got a cool tee shirt. There are other perks too. They specifically asked me to review PDR, and made it clear they wanted both the good and the bad. You’re reading that review.

This entry was posted in Computer Tips, Product Reviews and tagged video editing. Bookmark the permalink.