1944 IBM Ad: Hearkening Back to a Different Era 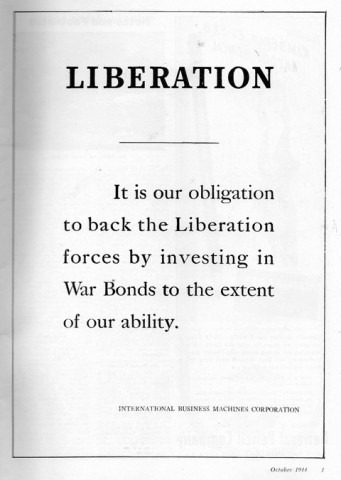 1944 IBM full-page advertisement in an art magazine. It reads: “Liberation. It is our obligation to back the Liberation forces by investing in War Bonds to the extent of our ability. International Business Machines Corporation.”

My wife found this in an old art magazine, dating back to October, 1944. One would wonder what IBM was doing advertising to artists, but during World War II, with rationing in effect, no one could buy just any old thing. So companies advertised just to keep their brand names in front of consumers so that when the war ended, they’d remember the company’s name.

It’s interesting to look back. During the Iraq and Afghanistan wars, one would hardly know we were at war. There were no shortages. Those who fought were all volunteers. Our taxes didn’t become outrageous. But in the early 1940s, President Franklin Roosevelt asked people to invest their savings in War Bonds, akin to what we call Treasury Bonds today. Essentially an entire generation of young men went to war—in fact, if you were a man of draftable age, you were expected to be in the service. My dad lied about his age (something you could do in that pre-computer age) to join the Navy, saying he was 18 when in fact he was 17. And he was in for the duration, too. He fought in the Pacific theater and was the pilot of a landing craft in the Philippines. If you were a civilian back then, you faced rationing and shortages. Further, many women went to work in the factories to produce war materiel and do behind-the-scenes work. (It was unfortunate that women didn’t keep those privileges after the war!)

The ad shows the starkly simple production style of 1944. No fancy visuals. In fact, it was intended to emphasize the company’s economy and dedication to the war effort—no frills allowed!

I worked much of my adult life for IBM and retired from them in 2013. I’m very proud to say I was (am) an IBMer.

This entry was posted in Personal and tagged IBM history. Bookmark the permalink.