Sometimes I get emails just too good to pass up. Here’s Sim Savage’s adventure in his own words: 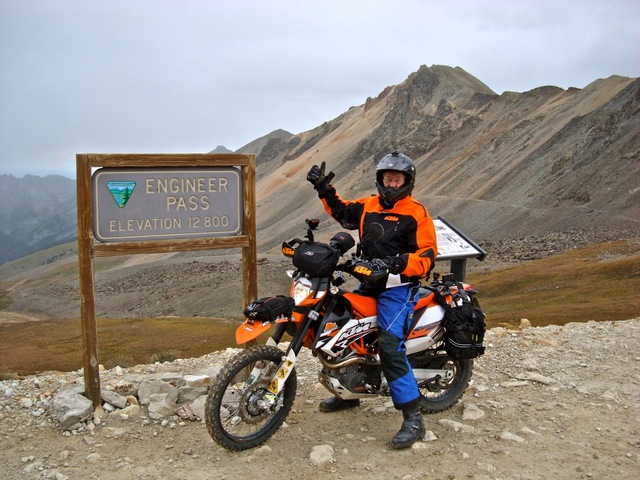 Many thanks for the thorough and expedient response to my query ! I am greatly appreciative. This trip I have planned with my son won’t be my first to Colorado. I think my wife and I have ridden every paved pass in the state over 10,000′ and done several 2-up on dirt. We had a little mishap last June 23 on Lost Canyon Road between Gunnison and Crested Butte [that you can see in this video:]

I wasn’t even moving when I went down but the bottom edge of the left rear pannier trapped my ankle against a rock and I broke the tibia, fibula, ankle and tore every ligament in the foot. The worst part was when they had to cut off my boot !!! But I managed to get one of the best trauma surgeons in the world and I am back to doing anything and everything I want to do, albeit with some residual stiffness that might take another 6 months to dissipate. Dr. Beim left a week after my surgery to go to London where she was the Chief Medical Officer for the 2012 Olympics !!! 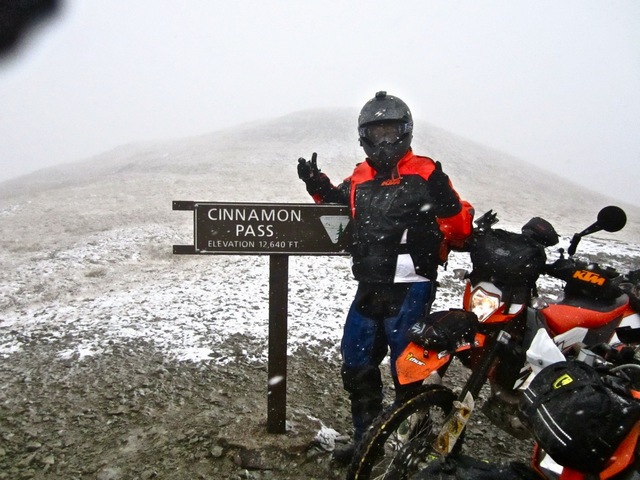 Snow this time of year? Sim at the top of Cinnamon Pass. Photo © 2013 Sim Savage

In September of 2011, 2 friends and I tried to ride a lot of the trails/roads in your area and managed to get from Silverton over to Lake City on Engineer and back on Cinnamon, but it was rainy going over and we were caught in a blizzard on our return(there are videos on my YouTube channel) – not the most pleasant ride I’ve ever had. And when the forecast was snow above 9,000 feet for a few days, we left and went to Moab – where we were rained out !!! 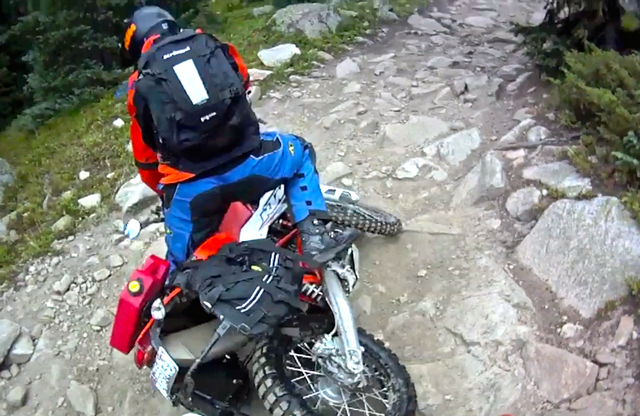 Further, both of the guys I was with have decades of experience on dirt bikes, but I only started a few years ago and am 68, one strike anyway. Plus, I was riding a new KTM 690 Enduro and it just wasn’t the appropriate bike for that sort of riding, though it was more capable than I was ! It was heavy, I was carrying too much crap, and the turning from right to left to right is way too narrow/short. (2 strikes !) I traded it for a lighter 500EXC and it’s made a huge difference – a positive one, I’m glad to say. I fell or dropped the 690 on a number of occasions on Italian Creek, American Flag and on one of the tight switchbacks going up Engineer above Animas Forks, as well as a couple of other spots, and I heard your words loud and clearly about timidity on that stretch of Imogene as that was the exact reason I went down each and every time. I’ve learned the hard way that momentum is the key and if you’re not comfortable with it, you probably shouldn’t be there ! It also seems that I’m having some altitude related issues which must be an age thing as it’s never bothered me in the past but seems to effect me now and saps my strength. Particularly when I have to pick up the bike at altitude !

This is a very long-winded way of saying thanks and I might just give you a call when we get to your area. I don’t know exactly what we’ll try and what we won’t, but I have made the decision that Black Bear is out of the question as I don’t deal well with heights and sharp drop-offs !!! And if we try Imogene, I think East to West might be the best alternative, particularly headed down into Telluride. Or do you feel otherwise ???

I spent more time on your site last night, and I was continually amazed at what a terrific job I think you’ve done with it. The combination of the narrative, the photos and the videos is, in my opinion, better than anything else out there. It’s informative and enjoyable and I plan to continue exploring for what I’m sure are numerous other hidden gems on the site for anyone planning to ride in your backyards.