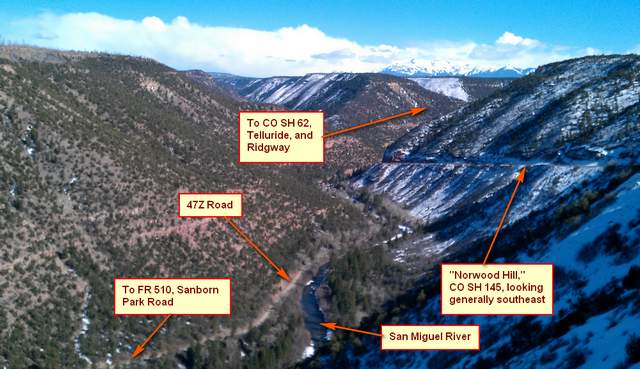 Norwood Hill, taken from near the top of the twisty road. Looking generally east, Norwood Hill is part of Colorado State Highway 145.

Woohoo! It was warm today! 53.6°F! After some pretty serious work that involved jumper cables, not to mention adding air to the tires and a little oil to the engine, my trusty 1994 Yamaha Seca II was ready to roll!

Grateful I am for my electric vest, the only Harley-Davidson-branded thing I own. My ride took me through Ridgway, then west on Colorado Highway 62 to where it meets Colorado Highway 145, then on down the nicely twisty San Miguel Canyon, up Norwood Hill (see photo), and back again, a total distance of around 100 miles. I had to cross Dallas Divide, and I can assure you that the temps up there were not in the 50s!

But, at last! The season begins! We’re in the middle of “mud season,” so all the dirt roads are in pretty bad shape, but before long, hopefully in April, I’ll be able to limber up the Yamaha XT-250 dirt bike and catch some of the trails at lower elevation. First in my sights is the Peach Valley area.