This view, taken from Point E on the map, shows Corkscrew Pass and Points A and B

Last July 22nd, a Friday, I set out to travel some high-country sideroads. Here are three more, all between Corkscrew (San Juan CR 11) and Hurricane Passes (San Juan CR 10). The views are spectacular, as seen above from my perch at Point E. Since there are lots of points involved, I’ll go straight to the GPS map, with other photos to follow. 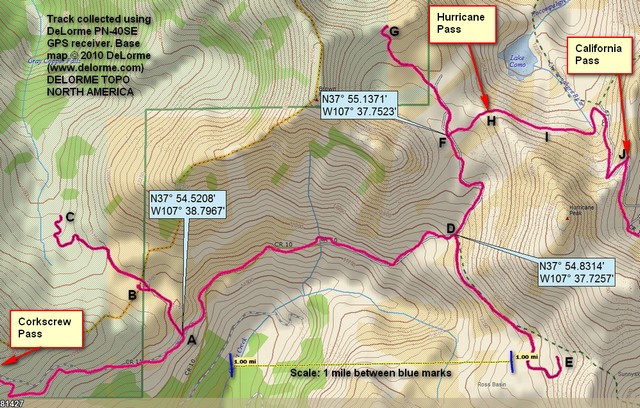 Sideroads between Corkscrew and Hurricane Passes. None of the intersections are marked, though all are obvious. The GPS coordinates (WGS-84) are given for Points A, D, and F.

The road from D to E is very easily seen while traveling between A and D. I’d never taken it before. It’s a fairly straightforward road, not steep. I got to the place shown in the photo below (Point E) and turned around. As you can see, the road goes up further. 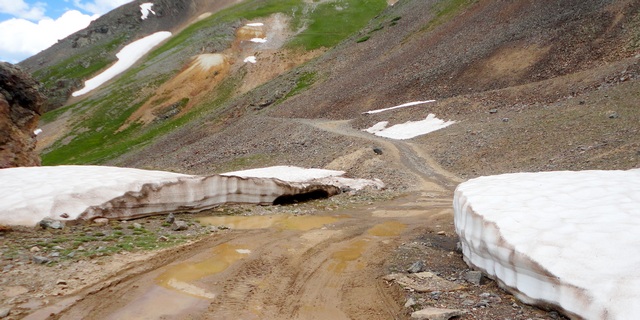 This is Point E, rather muddy. This is where I turned around, hence is the furthest point on the GPS map. You can see that the road continues. Sometime I'll follow it the rest of the way.

Let’s start at Corkscrew Pass, just off the map to the lower left. The road descends steeply. Before you get to the intersection with CR 10, there’s an unmarked road that heads northwest, again rather steeply. I’ve always ignored it before, but friend Joe Musso suggested I ought to give it a try. I wasn’t disappointed. Below is a picture of me at Point B taken by a passing motorist. It’s right on the ridge and the views are spectacular. 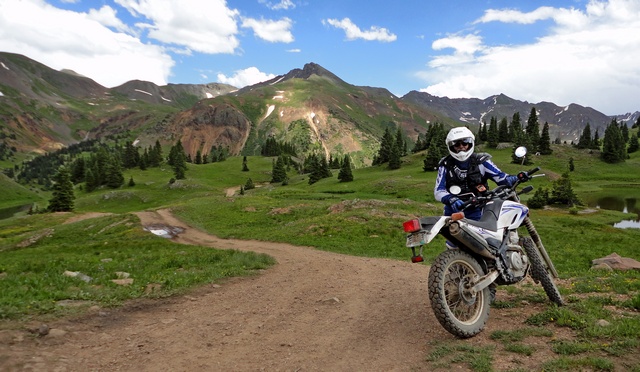 Dave at Point B, atop the ridge

This next photo is taken by turning about 15 degrees to the right and shows a lovely alpine lake at Point B.

Alpine lake at Point B

I traveled the road as far as Point C. Joe tells me if I go further I’ll come to some interesting mine ruins. The road certainly goes further than Point C. Between Point B and Point C I took the picture below, which shows Red Mountain No. 1 (there are three Red Mountains) from an angle I’d never seen before. This shot is an approximately 90-degree panorama created using two wide angle shots plus some work in Adobe Photoshop Elements 6.

Red Mountain No. 1 taken between Points B and C, probably closer to Point C

Let’s take a closer look at the map. If you’re traveling the standard route, you’ve come up over Corkscrew Pass on San Juan CR 11, which you follow down past Point A to where it intersects CR 10. You follow this to Points D, F, H, I, and J, and thence down into Animas Forks. There is one other side road I’d like to mention, nearly to the top of Hurricane Pass (Point H) that starts at Point F and goes off in an entirely different direction to Point G and beyond. I got to the ridge (clearly visible on the base map). The road continues on down for a ways—again I didn’t follow it down, leaving it for another day.

I thought I’d end with an interesting photo of Lake Como, the headwaters of the Uncompahgre River. This photo (July 22nd), shows ice still on the lake. 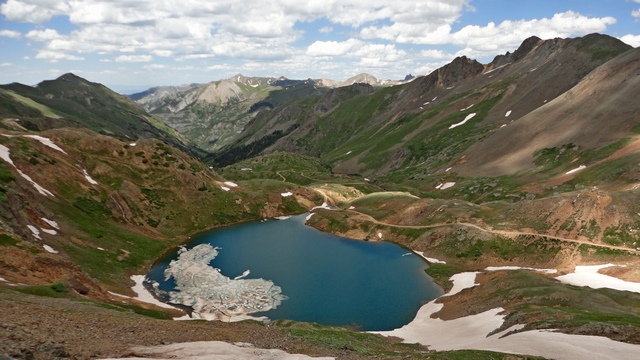 Como Lake, still with some ice, taken from point I between Hurricane and California Passes

So, there you have it: some pleasant side roads, each of which can be explored further. All these roads are accessible to Jeeps and similar, ATVs, and motorcycles. I might point out that if you’re traveling from Corkscrew Pass to Hurricane Pass and beyond, the section from F to H is very steep with a fair amount of scree. It’s relatively straightforward to pick a path through on the motorcycle, but do give this stretch the concentration it deserves!