Peach Valley—GPS Proves its Worth!! 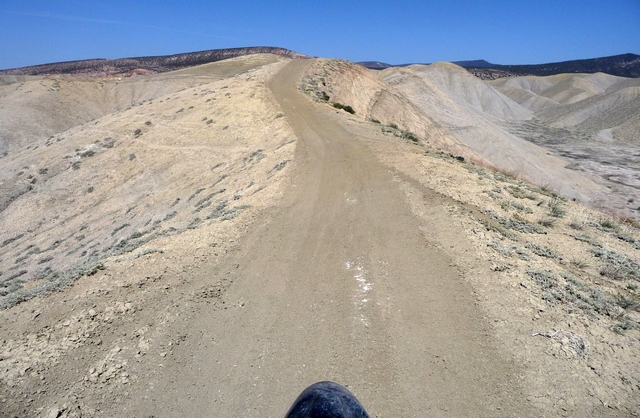 I'm atop a ridge line in the free riding area in Gunnison Gorge National Conservation Area, near the Peach Valley parking area. The track you see is a double track, meaning ATVs can use this trail too. The area is called "the adobes" because of the adobe soil: crumbly and with relatively good traction. Note that the trails tend to follow the ridge lines. If you want to look at the stunning views, stop! When you're moving, you need to concentrate on the trail. After all, it's a long ways down on either side!

Yesterday I drove to the Peach Valley parking area in the Gunnison Gorge National Conservation Area near Olathe, Colorado. Directions: From Hwy 50, just south of the traffic light, turn east on Falcon Road and follow it until it becomes dirt. Keep going, cross the bridge, and the parking area will be on your right. There’s a large “free riding” area and I made use of it freely—so freely I got lost. Thank goodness for the GPS! I was able to retrace my steps and get back to the parking lot. (GPS track is below.) The lesson here? The place is such a spider’s web of tracks that you can find yourself, as I did, with no way out except to climb steep hills. I got much better yesterday at climbing steep hills. See the photo below for some of the steep hills, keeping in mind that the tracks (mostly single tracks) follow the ridge lines.

I’ve upgraded some equipment. I acquired Jayson’s old 3-rail motorcycle trailer and made a couple modifications to make loading and unloading the bike easier. This allowed me to run several errands prior to riding, and then go to a Montrose Amateur Radio Club meeting afterwards. It worked out well. 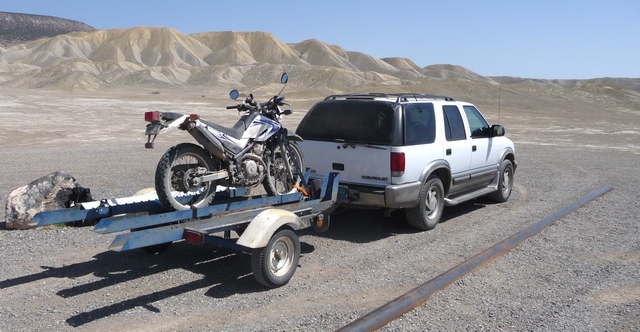 Three-track motorcycle trailer can carry up to three bikes at a time.

Okay, we come to the GPS track. Here are some notes:

Moral of the story? Keep track of where you are. Don’t go down any hills that you wouldn’t want to go back up. Oh…and take a GPS that collects a track so you can follow it back to base camp! 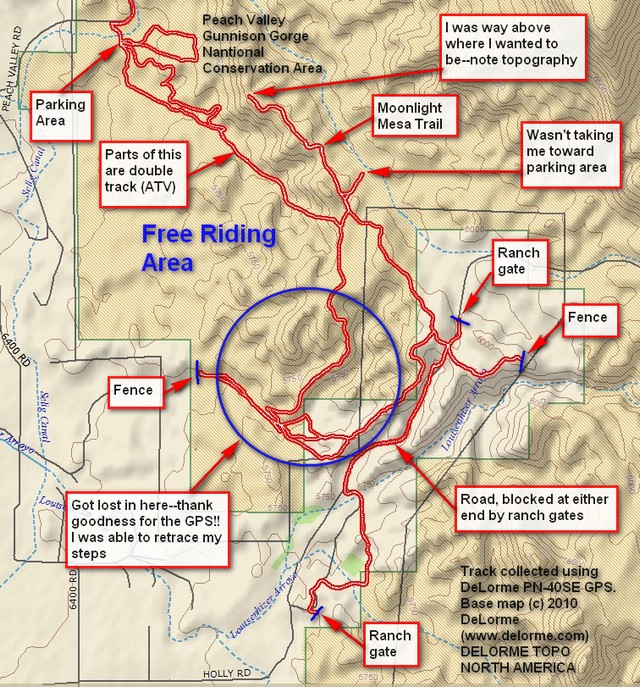