DeLorme RAM Motorsports Mount for PN-series handheld GPSs. It's more rugged than I thought. Click on image to go to DeLorme page.

On my first ride of the 2011 season, I did the usual: I took along my DeLorme PN-40SE GPS receiver. And, I had it tucked sort of into the tank bag map folder. Continuing with the usual, it collected the track, but was otherwise pretty useless as I was riding. I especially wanted the speed reading as the speedometer on my old 1994 Yamaha Seca II reads higher than my actual speed. About halfway along the ride, the thought came to me: just buy the stupid bracket!! I’d been avoiding it because of its $50 cost. But it seemed to me that having the GPS out and available while riding might have its benefits. I ordered the RAM Motorsports Mount for PN-Series Handheld GPS from DeLorme. I was pretty concerned that nothing could hold up to the pounding the dirt bike gets, so it was with some trepidation that I opened the box. I was pleasantly surprised by the choice of materials. Plastic, yes, but of the industrial kind. Light as a feather and strong as an ox. It consists of three main parts, as shown in the photo below. 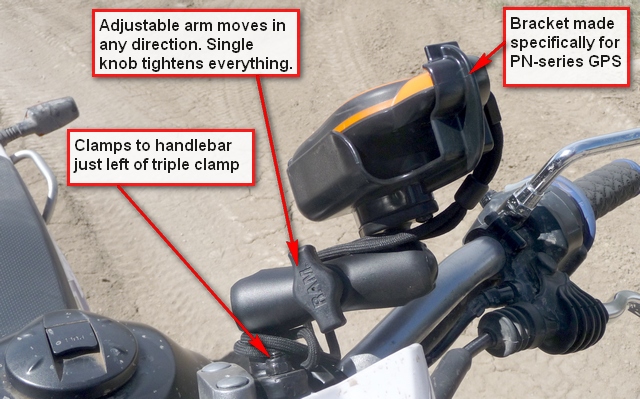 DeLorme RAM Motorsports mount for the PN-series GPS. It fastens securely to the handlebar in any handy vacant spot, in this case just to the left of the triple clamp. There's an arm that has a ball mount at each end--a single knob tightens everything at once--very convenient. The sleeve for the GPS receiver is a perfect fit and the top snaps right on.

I took it out yesterday up on Glenn’s Road, knowing that although the road is certainly passable, it’s also quite bumpy in places. To my pleasure, the GPS did not budge. Using my left hand as a sensor, I felt very little vibration at the GPS unit itself. So, here’s what the cockpit looks like from the rider’s position:

The GPS is easily viewable while riding, does not cover up any instruments, and isn’t in the way of any of the controls. I was particularly interested in the real-time speed reading, as the speedometer on the XT-250 is pretty far off given that I put on a different front sprocket. Since the GPS receiver is now firmly planted in one place, a quick glance gives me my speed. And…here’s the unexpected benefit: while it is true that many of the roads indicated on the GPS base map aren’t really there, I found some that really were there that I’d overlooked. Very cool. Is it worth the $50 (actually $49.95 plus tax and shipping)? For me: absolutely!