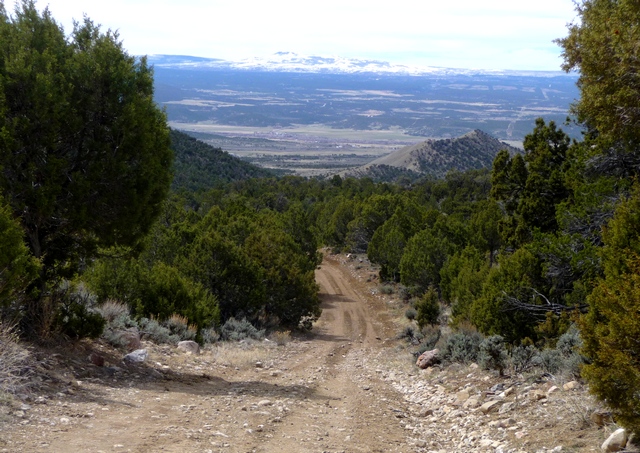 Looking southwest, taken from upper (eastern section) powerline road. Yes, the road is as steep as it looks. No problem traveling, though, either up or down.

Following the theme of taking advantage of good weather, I hopped atop my Yamaha XT-250 dirt bike and headed for the hills. Knowing that the high country is still snowed in, I took a route I like very much. It connects from Buckhorn Road on the south (in Montrose County) to Kinikin Road (also Montrose County) on the north. I took a side expedition to the east. As there is no name for this road, I call it Glenn’s Road after the person who introduced me to it. (See this post for the history and the wild ride.) I recognized many features from last year’s ride. It was pretty easy going, although steep and rocky. Fortunately, there was very little scree (loose rock) so no problem. I turned around after getting up into areas of patchy snow and muddy roads. Glenn’s Road isn’t paved. Nor graveled. It’s just dirt. It’s fairly well-traveled (meaning one or two vehicles a week) and can be traveled in a pickup or Jeep as well as ATV or dirt motorcycle (I wouldn’t try this on a street bike!). You can get a feel for how steep it is by looking at the lead-in picture. I got up to where I could look down on Montrose (see next photo): 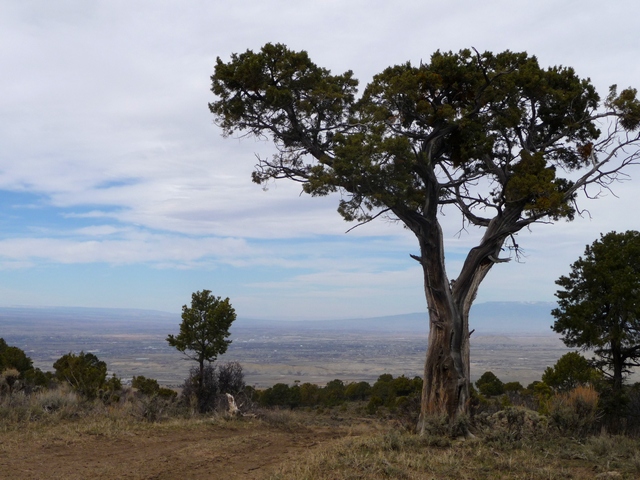 Looking down on Montrose, Colorado, from Glenn's Road. You can make it out in the distance. The mountain at the right, way off in the hazy distance, is Grand Mesa.

The GPS track follows. I backtracked down Glenn’s Road and then took what I call the Lower Powerline Road up toward Kinikin Rd. Just shy of that, I turned west toward the water tower, then came home via Pahgre. Very leisurely and enjoyable ride! 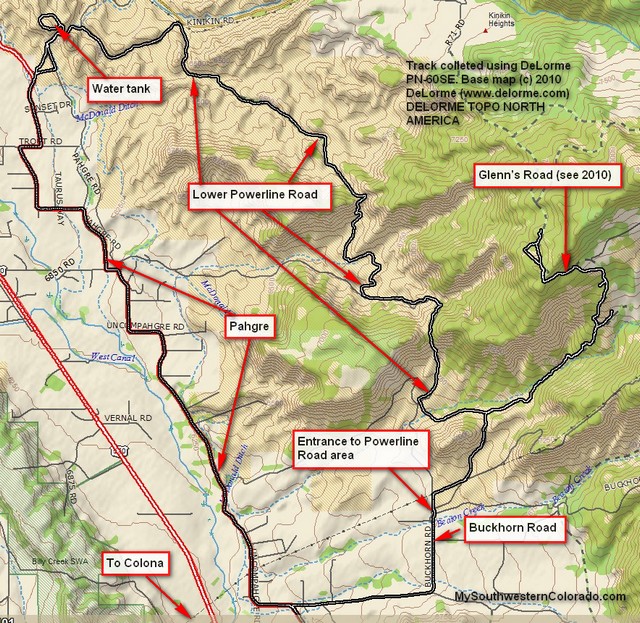 Powerline GPS track including Glenn's Road. Starts at Buckhorn Road near Colona, comes out at Kinikin Road, then by water tower, then back via Pahgre.