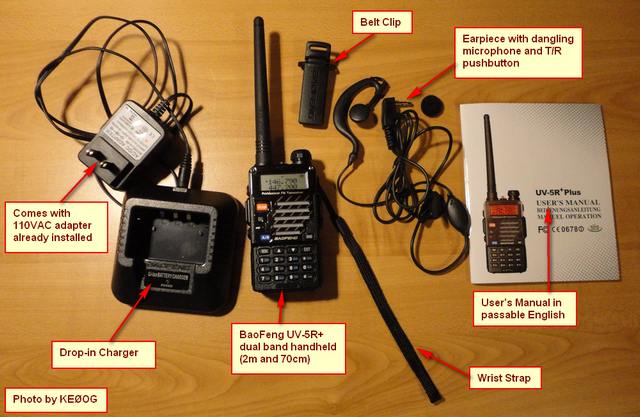 I’m always on the lookout for inexpensive equipment to recommend to new hams, and the BaoFeng UV-5R+, at around $60 including shipping on Amazon, fits that bill. Here’s the review I wrote for Amazon:

“I put my new Chinese Baofeng UV-5R+ through its paces and it seems like a competent inexpensive dual-band ham radio handheld transceiver. It shares some features with its cousin, the Wouxun KG-UV3D (note the similarity in model numbers). The Baofeng has a better manual, is much easier to operate, and has an English-sounding voice that announces the numbers and such. That said, it still takes some serious button-pushing to put a repeater frequency in memory – the input frequency and the output frequency are set separately, and then you need to wedge in a CCTSS tone. If it’s like the Wouxun, this is all easier to do if you purchase the optional cable to set up the memories using your computer. The key feature of the Baofeng UV-5R+ is its price–by far and away the least expensive 2m / 70cm handheld on the market. Like the Wouxun, it features a flashlight (why didn’t anyone think of this before! – a great thing to have in your handheld radio for use on dark nights or on the road) and FM radio reception. Would I recommend this to a freshly-minted Amateur Radio operator with Technician license in hand? Yes, though I would recommend you find a more experienced ham to help you set it up. The radio as it stands has the same inverted antenna connector as the Wouxun, and you’ll want to attach it to a larger antenna for anything except really close-in communications. Also, it’s a 4-watt radio instead of the normal 5-watts for a handheld. Its features are basic but competent. It comes with a drop-in charger and a simple earpiece with a dangling microphone. For this price, go for it!”

A few additional words here: I’m actually kind of amazed this is considered an FCC type-accepted radio, but it is, apparently under Part 90, not Part 95. It appears to transmit outside the ham bands, though I haven’t tried it. But for an incredibly inexpensive radio, about a third the price of the most inexpensive Japanese competitor, it’s quite a bargain. As noted, it can be frustrating to program, so you’ll probably want to get the programming cable and download the software from the manufacturer’s website.