Lew French, KCØUER, gave me this idea. Components for chain link fencing are inexpensive. The so-called “top rail” is the horizontal runner across the top. Lew showed me how one end on each is tapered to fit into the next pole. One pole atop another is sturdy enough for about a 22-foot mast. I said “aha!” and realized I had a solution for raising my 80-meter full-wavelength horizontal loop antenna a little further off the ground. Right now it’s held in place by ropes thrown over trees. So, I’m replacing the current antenna (made out of old army-surplus field wire) with something stronger. Here’s a picture of how I attached things to the top of the antenna. 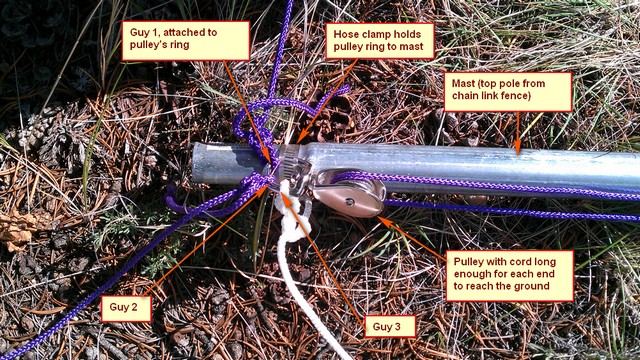 Mounting hardware atop mast. The mast is chain-link fence “top rail.” Note the pulley to raise and lower the actual antenna. 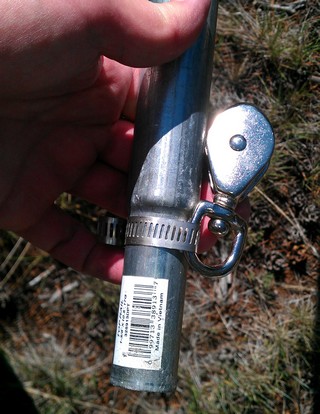 I attached the pulley to the top of the mast using a sturdy hose clamp. Note that the “extra” hose clamp is bent out of the way so it won’t abrade the guys. Then I tied the guy ropes to the pulley’s ring.

The problem with a horizontal loop is that it needs four supports, one for each corner. The first support is easy—it’s atop my house. But to get any kind of decent supports for the other three corners seemed to be an impossibly expensive option—towers aren’t cheap, even small ones. But with the inexpensive top rail, my problems were solved. Now…one top rail inserted into another is a wobbly thing. I tried three, but that was way too wobbly and would have required guying both in the middle and at the top. So I compromised on two, giving me about 23 or 24 feet of height. Each “tower” has a pulley at the top to raise and lower the actual antenna, plus each has three guys which are actually polypropylene cord. (My wife doesn’t care for the colors—rather bright, but that’s all I could find at Home Depot.) I tied the top end of each guy to the pulley’s ring, which is smooth, to reduce the probability of wear, plus it’s firmly in place. So, the complete “tower” (mast) assembly is two top poles, one inserted into another, with the joint taped with duct tape. The tape is only important during mast erection—in normal use things are held in place by gravity, but the two poles showed an annoying tendency to separate during erection. I spread the guys out on the ground, then walked the antenna upright. 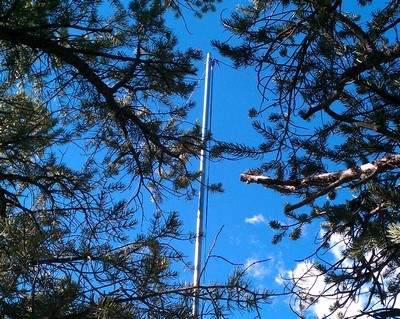 The poles are raised so that they’re in between the trees and the loop can run from one mast to the next without getting tangled in tree branches. Each mast has a pulley to facilitate raising the actual antenna, an 80-meter full-wavelength horizontal loop.

While my wife, Loretta, KBØVWW, held the pole upright, I tied the guys to nearby trees. My goal was to tie them high enough on a tree that no one could walk into one unawares, and low enough that high winds wouldn’t cause that part of the tree to sway back and forth. I was able to meet both those criteria with all the guys. One had to be stretched quite far to ensure it was high enough above the driveway that the propane truck can drive underneath without a problem. We did final checks to ensure the masts were vertical by moving the base—not the top—figuring that was much easier than constantly adjusting guys. The poly cord has quite a bit of stretch, so I figure they’ll stay in place in a windstorm.

I’d very carefully sited the masts so that the antenna wire can run without interference from the trees—a nice line of sight from one mast to the next. And, from the front of the house, the masts are nicely hidden from view, as you can see in the photo. The next step is to string the antenna itself. That will be the subject of another post.

(You may say to yourself that this new setup doesn’t look terribly permanent. Well, it’ll stay up for a few years at least, and by then I’ll want to change everything anyway!)