Ten-Tec Jupiter Line Input Mod: I’ll skip this one, thanks 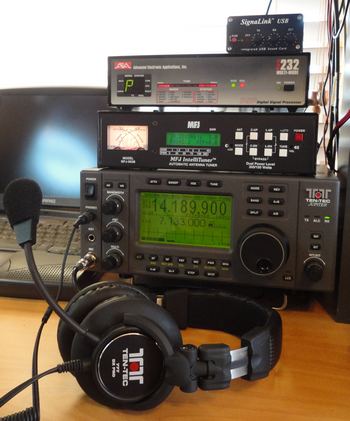 My Ten-Tec Jupiter-based station. In the foreground is my Ten-Tec 777 headset. Behind that is my Ten-Tec 538 Jupiter (early model). Atop that is an MFJ-993B IntelliTuner automatic antenna tuner. Atop that is an elderly AEA (now Timewave) DSP-232 running APRS in conjunction with the laptop at the left and an unseen VHF radio set to 144.390 MHz. At the very top is a SignaLink USB that I use between the Jupiter and my computer for digital modes such as PSK-31.

I love my Ten-Tec Jupiter. Very good rig! But I noted earlier that I had trouble feeding it audio for HF digital work because the line input via the AUX1 connector is remarkably sensitive. I had to put a 10:1 voltage divider in the SignaLink USB to cut the audio down to what the Jupiter would accept. It works, but the Jupiter is still too sensitive and the adjustment takes some finesse.

As it turns out, the later (black) Jupiters had a “small” modification so they wouldn’t be so sensitive. Thanks to reader Sal for pointing this out. Here’s the deal. Ten-Tec now offers a sound card interface similar in concept to the SignaLink USB, although without the knobs and adjustments. It’s called the “MODEL 712 – USB SOUNDCARD DIGITAL MODE ADAPTER CABLE.” But…there’s a warning that comes with the 712:

“NOTE ON USE WITH JUPITER HF TRANSCEIVER
“The earlier version of the Jupiter with the gray case and green screen is not usable with the 712 as a plug-and-play device. The later black case/blue screen Jupiter can be used as-is with 712. There is too much gain internal to the transceiver on the line input which makes use of the 712 problematic with the earlier Jupiter. There is a small hardware modification to the earlier Jupiter which will allow use of the 712 as a plug-and-play device; contact TenTec Service at (865) 428-0364 or service@tentec.com for information.”

I contacted Ten-Tec to inquire as to the “small hardware modification.” Garry Green, N4CJX, at Ten-Tec replied with a single JPEG image. I zero in on the relevant part in the following photo.

Here's the photo I received from Ten-Tec, noting a resistor that needs to be replaced with a 33K-ohm resistor. No other instructions were provided. Photo from Ten-Tec.

I wouldn’t exactly call this single photo a complete set of instructions for making the modification, so I investigated further prior to opening up my Jupiter. I dug into the instruction manual, which comes with extensive parts-layout drawings, schematics, and bills of materials. Here’s a close-up of Figure 4-15 from the original instruction manual, which is the parts layout diagram for the Digital Signal Processing (DSP) printed circuit board (PCB). Note that this is a high-res scan. 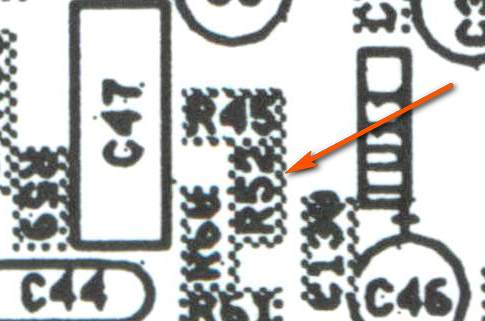 The modification is to replace R52. I added an orange arrow to point out the part. This is only a tiny portion of the diagram—I couldn't read it without a magnifying glass.

As it turns out, the part is R52 on the DSP PCB. Okay, let’s find out what R52 is. Here’s a closeup from Figure 4-11, the audio input/output portion of the DSP PCB.

Ten-Tec Jupiter schematic shows that the resistor to be modified is 330K-ohms. I circled R52 with a blue ball-point pen.

All right, we’re swapping out a 330K-ohm resistor with one that’s 33K-ohm, a factor of ten between the two. Fair enough. But, actual inspection of the circuit board reveals this: 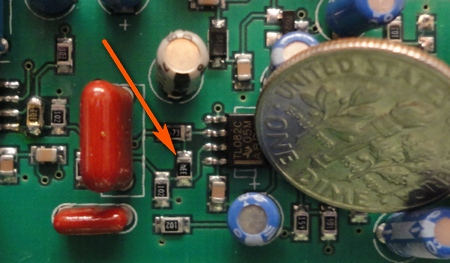 Uh…yes, it’s a “small modification.” Very small. I put a dime in the photo so you can see just how small it is. Compare the size of R52 (orange arrow) with the “N” in “One Dime.” Also note that the integrated circuit just to the right of the part is actually a surface-mount device, itself very small.

So, I’d say the modification is “too small.” I’d need a microscope to fix this! Frankly, I don’t think John Q. Ham can attempt this without some seriously uncommon equipment. I certainly can’t! So…I guess my gray-box Jupiter will stay unmodified, and I’ll live with the quite-sufficient work-around I made to the SignaLink USB. It was a lovely journey into the depths of my Jupiter, but it has all the attributes of “look but don’t touch!”

P.S. Opening the Jupiter requires dealing with some screws with a weird star pattern that won’t accept a traditional screwdriver. I didn’t have the right tool, but found that a 5/64-th hex key (Allen) wrench, if used gently, works.

This entry was posted in Ham Radio blog entries and tagged Ten-Tec Jupiter. Bookmark the permalink.

5 Responses to Ten-Tec Jupiter Line Input Mod: I’ll skip this one, thanks