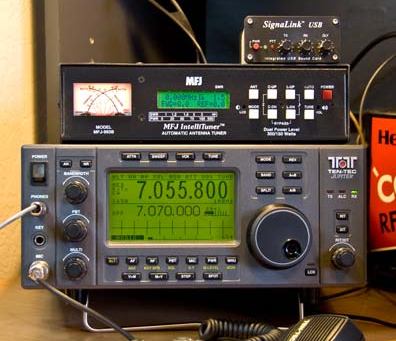 The Ten-Tec Jupiter (Model 538), now ten years old, is at the core of my current HF station, as seen in the image at the right taken only a few minutes ago. I wrote an earlier post reprinting the review of the Jupiter I wrote ten years ago, which you can find here. That post shows I was pretty pleased with the rig in 2001. What do I think of it now that ten years have gone by?

I still think highly of it. Here’s the good, bad, and ugly:

So, will I keep on using the Ten-Tec? Yes, likely into the indefinite future. I’ll admit technology has moved on in the past ten years, and I’ve got my eye on a couple radios. But even if I find the cash to purchase a newer radio (the Yaesu FT-950 sure looks interesting), I’ll keep the Ten-Tec just as I did my old Yaesu FT-747. The Yaesu is my loaner rig. I’ve learned never to sell old radios—I traded in my Heathkit HW-16 and HG-10V VFO when buying my old Yaesu FT-201, and then traded in the FT-201 for some internet gear. Never again! I’ve regretted those sales. The Ten-Tec Jupiter does everything I ask of it and more and likely will continue to do so for several more years.