Uh...this is a road? This photo was taken at "Point A" on the map below. In fact, it's a ranch road through a field, and not a very good road at that.

I just updated from DeLorme Topo USA 8 to DeLorme Topo North America. (The name change implies Canada.) The same map appears on my GPS unit as appears on Topo North America. I don’t know where DeLorme gets their road information, but it contains so many errors out here in the boondocks that it’s only of cursory interest. As exhibit A, I point out this small section of track from yesterday’s ride: 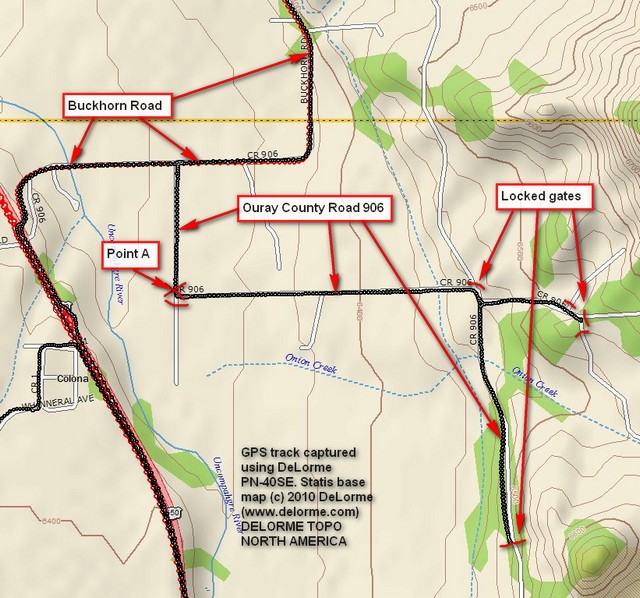 Ouray County Road 906 GPS track. Note "Point A." I'm standing looking south from Point A and took the shot at the top of this post.

What’s happening is simple: DeLorme must’ve developed their road network from aerial photos. Sometimes it’s hard to tell the difference between a public and private road. Looking at the GPS track above, I traveled all of Ouray County Road 906. Note how many side roads the DeLorme map shows. And yet these are either driveways or roads on private land.
Let’s take another example, a closeup of the ride I took yesterday: 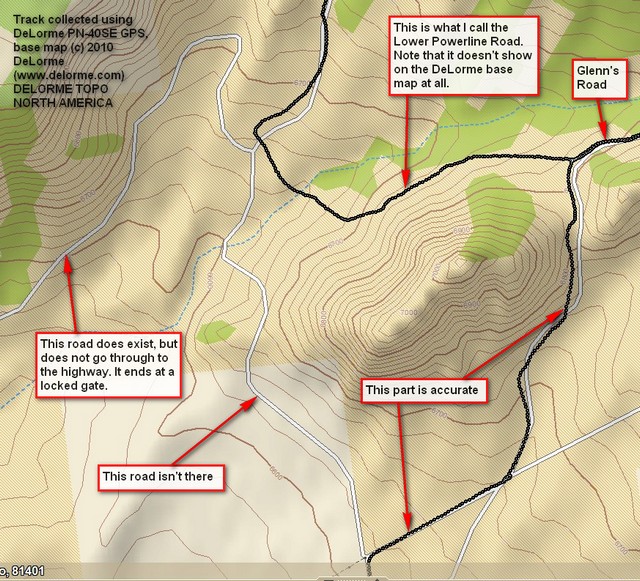 The southern part of the north-up map is accurate—you can see that the track follows the road closely. However, after I finished riding up and back on Glenn’s Road, I turned west onto what I call the Lower Powerline Road, one of my favorite close-to-home rides. It doesn’t show up at all on the PN-40SE GPS map, nor in Topo North America. And several roads do show up that aren’t actually there. In fairness, I’ll say I’ve discovered some roads I didn’t know were there by poking around on the motorcycle while using the GPS in real time. Net? If there’s any way I can help clean up the maps of this area, I’d love to. My thinking is that the map should show public roads. It would be nice to eliminate the private roads so John Q. Public can use the maps for planning!

1 Response to DeLorme maps: some grumbles